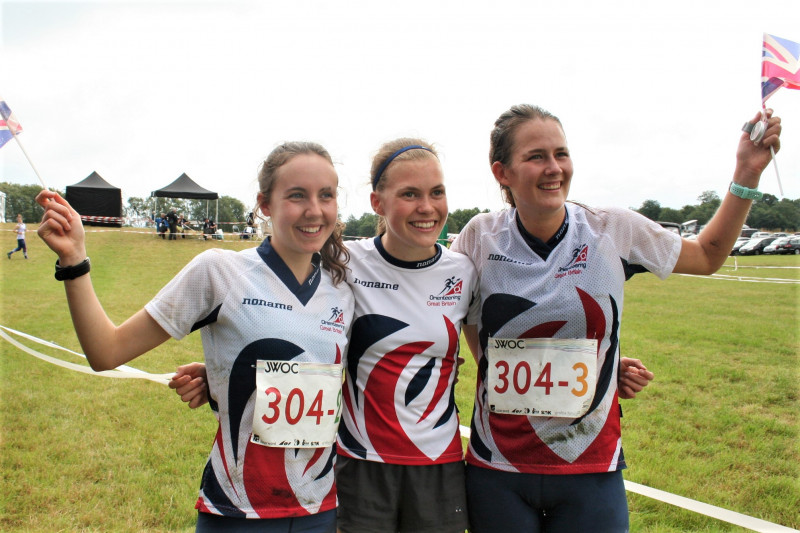 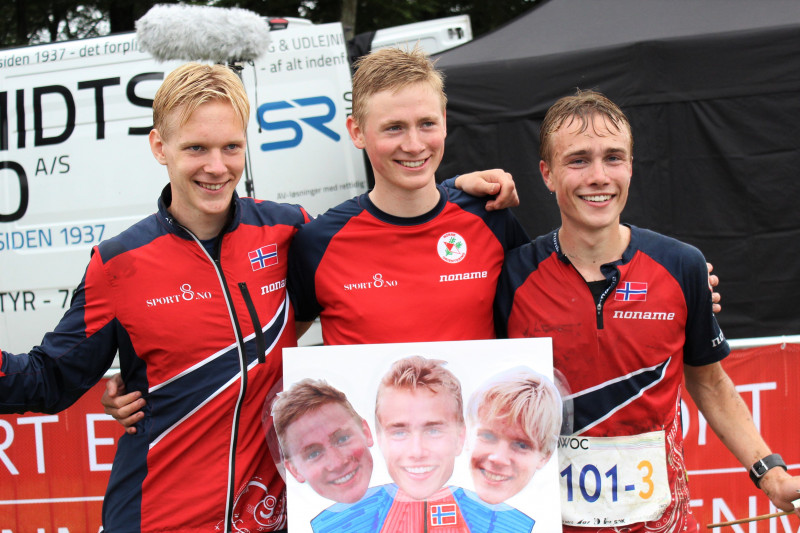 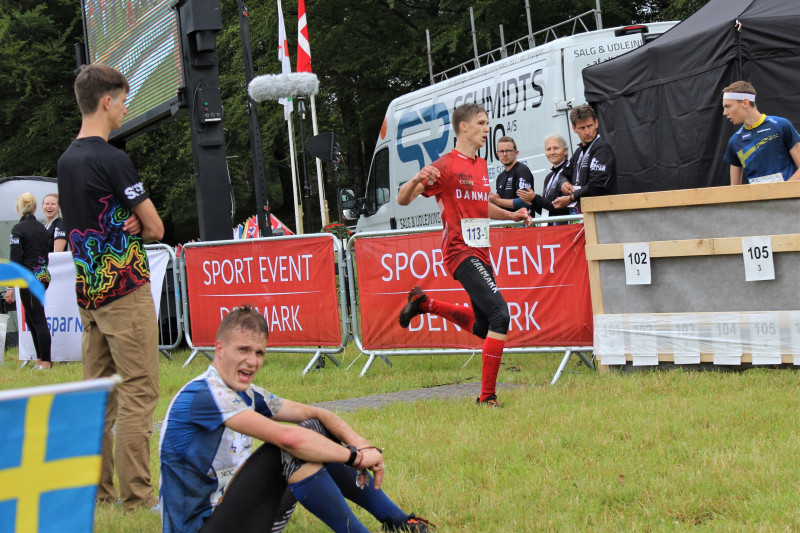 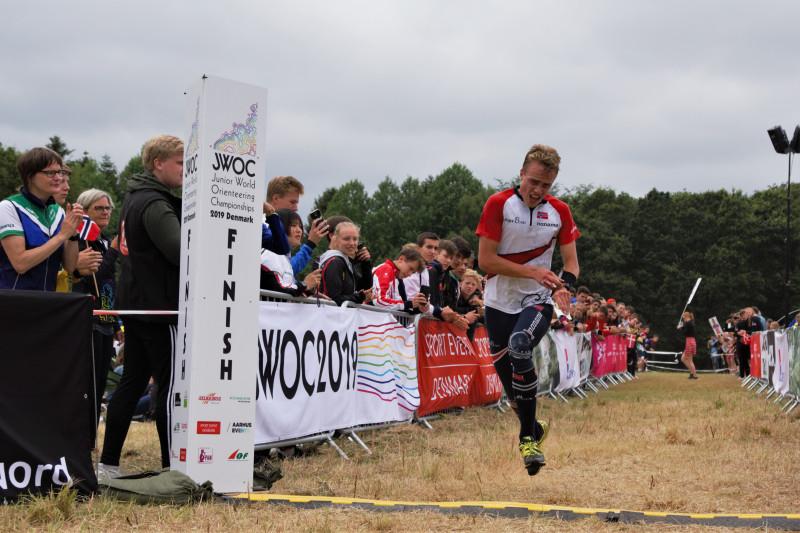 The Norwegian Kasper Fosser again showed his class with a win by 1.09 in today’s Middle Final. Isa Envall, Sweden won the women’s race by a convincing margin.

Isa Envall set the marker point for the women’s race from a position half-way through the start list, and towards the end in particular there were several runners who seemed as though they might chase her time down. Closest was Fiona Bunn, Great Britain, who took the silver medal with a time 0.54 slower than Envall’s. Tereza Janosikova, Czech Republic, winner of two silver medals in JWOC in the last two years, was in bronze medal position today.

Kasper Fosser dominated the men’s race much as he did in the Long distance. His closest challenger was Frenchman Guilhem Elias, who ended 1.09 down. Norway ended with two medals today, bronze going to Lukas Liland.

The courses were both technically and physically challenging with many steep slopes, and with the start and a spectator control in the arena, plus the big screen, there was lots to keep spectators on their toes. 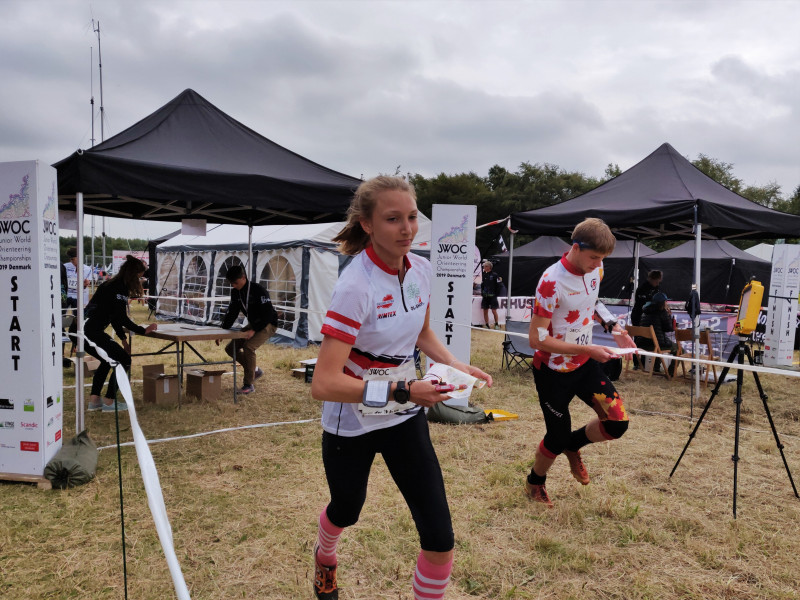 There will be athletes from 24 nations in the A-finals tomorrow. Heat winners today include Kasper Fosser, Norway and Aston Key, Australia, champions in Long and Sprint.

Best nation was Sweden with 11 qualifiers, followed by Denmark and Switzerland with 10. Finland and Norway have 9, and the Czech Republic and France 8. At the other end of the scale, Slovakia and Ukraine have 1 qualifying athlete and Australia, Canada, Germany, Spain and USA have 2. 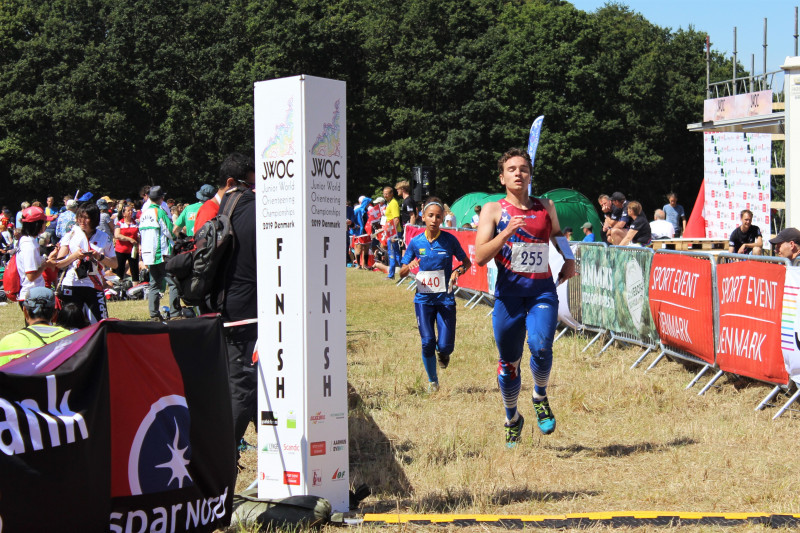 After a rest day it’s back to serious business today with the Middle Qualification in the legendary Gjern Bakker terrain, used for both World Championship and World Cup races in the past. The goal for all competitors is to finish amongst the best 20 in their heat, so securing a place in the A-Final tomorrow. There are 3 women’s heats and 3 men’s. Times are fast on this fine, sunny morning, with yet another super arena surrounded by forest, and a big crowd of excited spectators.

Tomorrow the same arena will be used for the finals.

There have been no further protests by the deadline, so the jury’s decision stands and the women’s results are now official: gold medals for both Ida Haapala, Finland and Veronika Kalinina, Russia. The bronze medal goes to Grace Molloy, Great Britain. Full official results are on IOF Eventor.

During the Long Distance competition, the touch-free function of the Russian Veronika Kalinina's SIAC Touch Free card stopped working. As a result she had to hand-punch and her finish time was registered manually by the back-up system. In the provisional results - based on her manual time - she was placed second, 1 second slower than Ida Haapala FIN. Following a protest  from Russia, concerning the precision of the finish time, the Jury (Christine Brown AUS, Kalle Dalin SWE and Szava Zsigmond HUN) decided to adjust Ida Haapala's time to 53:46, the same time as Veronika Kalinina. The decision was based on an analysis of the times recorded by the back-up timing system. The Jury decided that the organisers cannot prove that the time in the manual backup timing system is the same as that in the primary system.

As a result of this outcome, the official result list of W20 and M20 approved by SEA Hannu Pyy is published here. In view of the lateness of the outcome, complaints about these results can be presented at the Event Office until 12.00 on Tuesday 9 July 2019.

Update: At 12.00 on Tuesday 9 July 2019 no complaints were received meaning the results are now final. 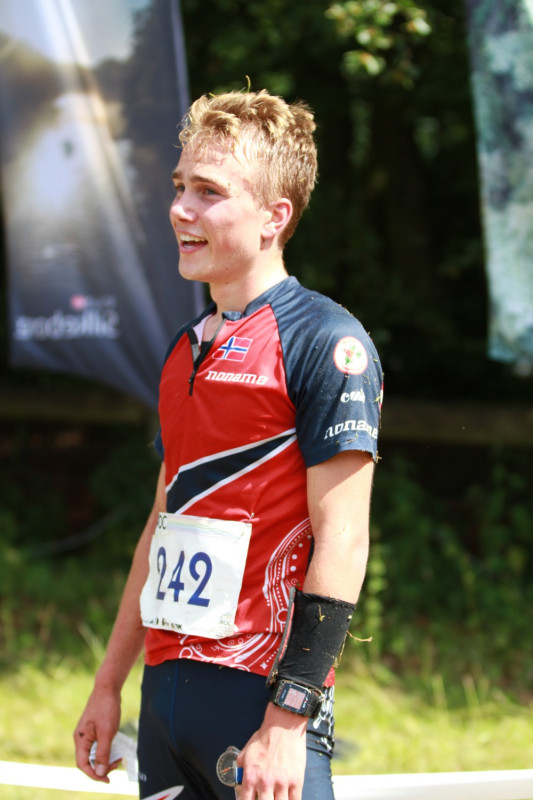